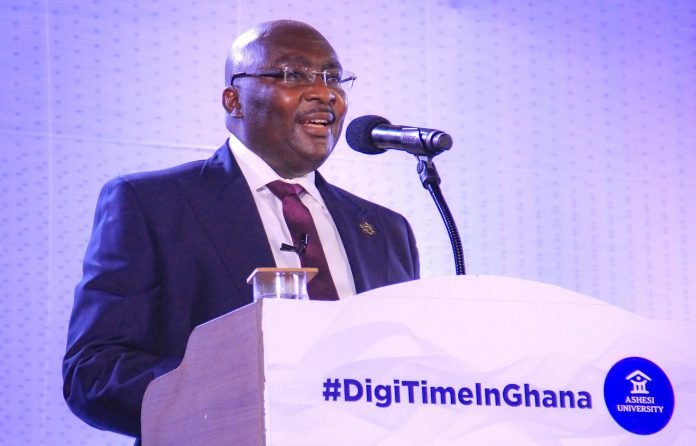 Vice President Mahamudu Bawumia has announced every new born child delivered in Ghana next year will get a Ghana card number within few months of birth.

Speaking at a public lecture to shed more light on the digital strides chalked by the Akufo-Addo government since it assumed office as part of measures to make public services more accessible and affordable, Dr Bawumia said the actual card will be issued when the child is grown and the biometrics are fully formed (after age 6). This, Dr Bawumia said, forms part of digital reforms being undertaken at the Births and Deaths Registry to make it more in tune with the times and provide better protected information on the citizens and residents of Ghana.

The Vice President, who made the disclosure while speaking on the theme “TRANSFORMING AN ECONOMY THROUGH DIGITALIZATION- THE GHANA STORY” on Tuesday, November 2, 2021 at the Ashesi University, Berekuso, said the transformation at the Birth and Deaths Registry was welcome news.

“Easily one of the most depressing visits I have paid to a government office during my time as Vice President was to the Births and Deaths Registry headquarters. There clearly was insufficient investment in the institution. It was messy and it was sad. It turned out that the Births and Deaths Registry had three separate databases as registers for births and deaths and these databases were in silos. It is not surprising therefore that corruption and fake birth certificates thrived in this environment,” he noted.

“Thankfully, the process of digitization of the records is almost complete and the three databases have been cleaned up and integrated. Furthermore, we are integrating the births and deaths register with the databases of Ghana Health Service, National Identification Authority, Ghana Statistical Service, Immigration and the Police so that the record of births and deaths should be consistent across all these databases.”

Outlining a long list of innovations either undertaken or on the cusp of take-off, Vice President Bawumia announced, among others, the impending launch of the E-Pharmacy, which would involve the digitization of pharmacies in Ghana.

“Patients or people generally face difficulties when trying to find medicines in pharmacies. They have no way of knowing which pharmacies have the medicines. They could go to five pharmacies before getting lucky. Sometimes patients are directed to go to specific pharmacies to buy the medicine, denying them any advantage there might be of choosing from a lower priced shop. People also don’t know what the prices of the medicines are at different pharmacies and tend in their time of vulnerability to just buy at the prices offered when they find the drug. It is also difficult to tell whether the medicines are genuine or fake. There is also the problem of drug abuse with prescription medicines like Tramadol.

“To address these problems, in 2019, I challenged the Pharmaceutical Society of Ghana to digitize the operations of pharmacies in Ghana. Following this and working with my office, the Pharmacy Council in collaboration with the private sector has completed work on a digital platform for all pharmacies in Ghana and a pilot of 45 pharmacies is currently ongoing.

“Basically, the digital E-Pharmacy platform will offer the opportunity to everyone through a mobile phone to upload your prescriptions and find out which pharmacies near you have the medicines. Secondly you can compare the prices for the same drug offered by different prices so that you can buy from the lowest priced pharmacies.”

Consumers will also be able to order the drug and pay for it on the phone through mobile money or GhQR (Scan and Pay), etc. The medicines are then delivered to the customers at home through a courier service.

As well, “The E-Pharmacy will enable Ghana address the issue of drug abuse. Those prescribed controlled medicines like Tramadol for example will only be given a one-time CODE sent via SMS (once the prescription is uploaded) to use at the pharmacy. The e-pharmacy platform will also check fake or counterfeit medicines because the platform will be linked to the Food and Drugs Authority (FDA) which will monitor the batch numbers of all products real time. Any drug for which the FDA does not have a batch number will be classified as fake.”

The lecture, which was attended by members of academia, students, the clergy, chiefs, and other members of the general public, was the latest by Vice President Bawumia, aimed at getting the citizenry, particularly the youth, to have a greater appreciation of the work being done in the digital space, and solicit their views on other areas that may need special attention.