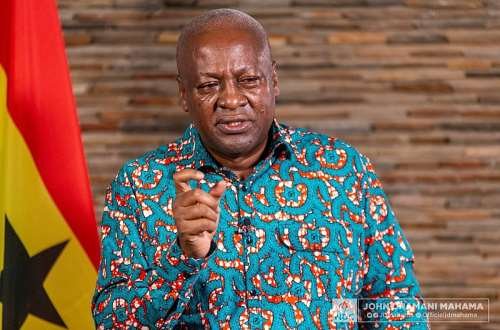 The Former President, John Dramani Mahama has said it does not warrant blaming Russia and Ukraine for the hunger in Africa. This comment comes after the World Bank said the world is facing a “human catastrophe” from a food crisis arising from Russia’s invasion of Ukraine

“Africa cannot blame the current Russia-Ukraine war as the cause of hunger on the continent”, Ghana’s former president John Mahama has said.

“When they say there is a Russia-Ukraine war that is creating hunger in Africa, it’s crazy. With the kind of land, water, and sunlight that we have here, why would the Ukraine war be a problem for us,” Mahama told Uganda-based NBS Television.

“Every country and every continent must take advantage in respect of what it’s comparatively good at.

We must leverage our comparative advantages. We have sunlight, water, arable lands, and natural resources. That’s what God blessed us with,” he told host Samson Kasumba.

Warning
The world is facing a “human catastrophe” from a food crisis arising from Russia’s invasion of Ukraine, according to the President of the World Bank, David Malpass.

In an interview with BBC economics editor Faisal Islam, Malpass, who leads the institution charged with global alleviation of poverty, warned that record rises in food prices would push hundreds of millions of people into poverty and lower nutrition if the crisis continues.

“It’s a human catastrophe, meaning nutrition goes down. But then it also becomes a political challenge for governments who can’t do anything about it, they didn’t cause it and they see the prices going up,” he said on the sidelines of the IMF-World Bank meetings in Washington.

The World Bank calculates there could be a “huge” 37% increase in food prices, which is “magnified for [the] poor”, who will “eat less and have less money for anything else such as schooling. And so that means that it’s really an unfair kind of crisis. It hits the poorest the hardest. That was true also of COVID”.

The price rises are broad and deep, he said: “it’s affecting food of all different kinds oils, grains, and then it gets into other crops, corn crops because they go up when wheat goes up”.

There was enough food in the world to feed everybody, he said, and global stockpiles are large by historical standards, but there will have to be a sharing or sales process to get the food to where it is needed.

Instead, he said, the focus needed to be on increasing supplies across the world of fertilisers and food, alongside targeted assistance for the very poorest people.

The World Bank chief also warned of a knock-on “crisis within a crisis” arising from the inability of developing countries to service their large pandemic debts, amid rising food and energy prices.

“This is a very real prospect. It’s happening in some countries, we don’t know how far it’ll go. As many as 60% of the poorest countries right now are either in debt distress or at high risk of being in debt distress,” he said.

“We have to be worried about a debt crisis, the best thing to do is to start early to act early on finding ways to reduce the debt burden for countries that are on have unsustainable debt, the longer you put it off, the worse it is,” he added.