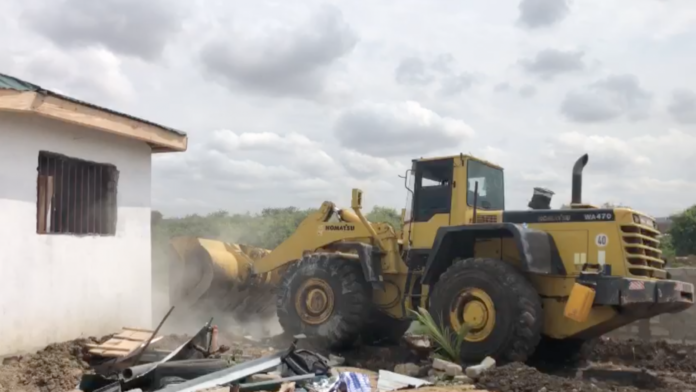 The Tema West Municipal Assembly has started the demolition of structures erected on waterways at Lashibi.

This follows a directive issued by the Greater Accra Regional Minister, Henry Quartey, to the Assembly weeks ago during a visit to the site.

Addressing the media during the demolition exercise, the Municipal Engineer of the Tema West Municipal Assembly, Vincent Blah Quarshie, said the move is to help reduce the perennial flooding in the area.

Mr. Quarshie said his outfit was following in the stead of the Greater Accra Regional Minister’s commitment to clearing waterways to limit the potential impact of flooding.

“The rainy season is almost here… to us in Tema West, it was welcoming for the Regional Minister to come and wake us up,” he said.

Mr. Quarshie further said the assembly already had its own plans to clear the structures on waterways.

“We already had an action plan to demolish buildings on waterways especially as the rainy season beckons.”

The construction work on the waterway in question was also impeding work on a bridge in the area.

Mr. Quarshie said he expects work on the bridge to proceed as planned.

“Once we have started, we want to make sure that whatever is preventing the contractor from working [on the bridge], we clear it.”

For the affected persons, the assembly did not offer much sympathy after the demolition exercise.

“Even though he has invested, at the end of the day, he himself is to be blamed [for the demolition],” Mr. Quarshie said.