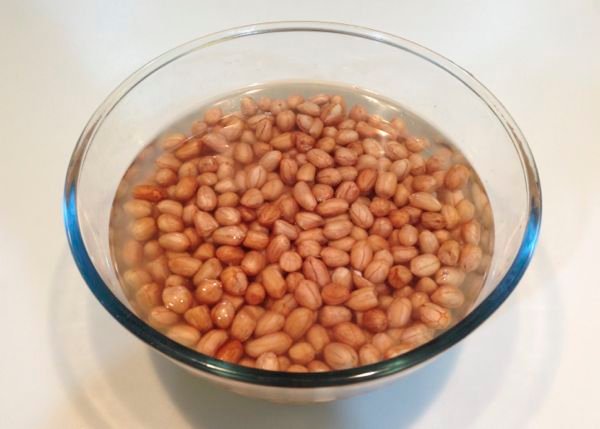 Groundnut water is obtained by steaming/ boiling or soaking groundnut in water for 15 – 30 minutes. Groundnut is also known as Peanut which is rich in monounsaturated fats, the type of fat that is emphasized in the heart-healthy Mediterranean diet.

May Aid Blood Sugar Control
Groundnut water may HELP stabilize your blood sugar levels. Groundnut has a GI (glycemic index) score of 14. While the GI of groundnut is 14 (on a 100-point scale), their GL (glycemic load, which tells what a particular food will do to your sugar levels) is just 1. That is why the American Diabetes Association names groundnut as a diabetes superfood. The fiber in groundnut also helps lower blood sugar levels. They also contain magnesium and other healthy oils that play a role in this aspect.

It promotes heart health
Groundnut water may help protect against coronary heart disease (CHD). A study conducted by the Harvard School of Public Health found that groundnut may lower bad cholesterol (LDL) levels. Bad cholesterol leads to plaque development in the blood vessels, and groundnut may prevent this. A study conducted on rats also stated that polyphenol-rich peanut skin extract may reduce the inflammation that causes heart disease.

It aids your weight loss efforts
Groundnut water is very high in calories, but they contribute to weight loss instead of weight gain. Groundnut is an energy-dense food. That is why having them as a snack, drink or shake may make you consume fewer calories later in the day. Groundnut elicited stronger feelings of fullness when consumed as a snack than with a meal. This may eventually help with weight loss. Some studies suggested that higher nut consumption was not associated with greater body weight gain and may aid weight control. Including groundnut in your diet is one way to enhance nutrient intake without causing weight gain. Research also shows that the consumption of groundnut and peanut butter can increase feelings of fullness. These could satisfy individuals better than carbohydrate-filled snacks in equal quantities

It reduces cancer risk
High intake of groundnut (including other nuts) has been associated with a reduced risk of colorectal cancer. The is flavones, resveratrol, and phenolic acid found in groundnut have anticancer properties which may help reduce the risk of cancer. A study conducted in The Netherlands found that peanut intake is also associated with a reduced risk of postmenopausal breast cancer. Groundnut was also found to prevent gastric and esophageal cancers among older American adults. When comparisons were made, individuals who did not consume any nuts or peanut butter were at the highest risk of developing these cancers.

It relieves symptoms of polycystic ovarian syndrome (PCOS)
Although, there is little research in this regard. Anecdotal evidence suggests that groundnut may help treat PCOS as they contain monounsaturated fats. Some research states that a diet high in these fats could help improve the metabolic profile of women with PCOS.

It has antioxidative properties
Groundnut is rich in numerous plant compounds and antioxidants. Most of these compounds are available in the skin of groundnut, which should be eaten raw to get all of its benefits. Some of the plant compounds that are readily available in groundnut include resveratrol, coumaric acid, and phytosterols that help impair the absorption of cholesterol, isoflavones, and phytic acid found in plant seeds.

Effects on our organism when drinking orange juice on an empty stomach.