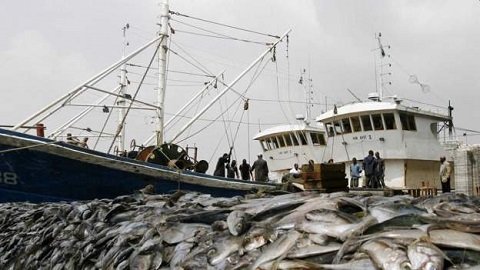 A fishing vessel sunk yesterday night between Elmina and Sekendi leading to 1 death and 8 persons missing. In all, 25 people were on the vessel.

According to the reporter, Charles Egyire said the vessel sailed deeper in the sear of about 16 nautical miles, south of Saltpond. This indicates that the portion of sailing is deep from the shores of Sekondi and Elmina.

The reporter explains that when the vessel reached the area they had a lot of fish to the extent that they were not able to pull the net. They complained to the captain of the vessel who happens to be Chinese but the captain insisted they should pull the net.

Thinking they have had a good harvest, the rope of the net by the name MB comforter2 tore and the vessel upended.

Upon the arrival of the rescue team, the team was able to rescue seventeen (17) out of Twenty-five (25) who were on the vessel. Out of the number rescued, Twelve (12) are Ghanaians and the five (5) are Chinese. Eight people are missing.

Unfortunately, the Captain of the vessel the Chinese was found dead upon rescue.