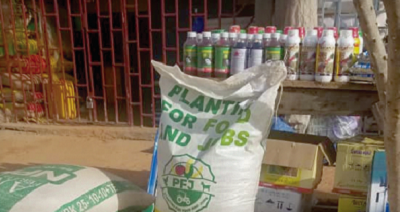 The Peasant Farmers Association of Ghana has bemoaned the unavailability of subsidised fertiliser to farmers due to outstanding debts owed to suppliers by the government.

The Head of Programmes and Advocacy for the Association, Dr. Charles Nyaaba said the suppliers are no longer willing to supply fertilisers at a subsidised cost.

He revealed that government owes the suppliers an outstanding debt of about ¢346 million since 2020.

According to him, the suppliers have also complained about the situation, adding that “they also have to go to banks and get loans to bring these fertilisers.”

“Interest rate on those loans that they have taken continuously goes up and they are business people.

“We have approached them they said they are business people and we can’t collapse their business because we want to provide fertilizers to you,” he explained.

He, therefore, pleaded with the government to settle the suppliers’ debt so that fertilizer deliveries to farmers could continue.