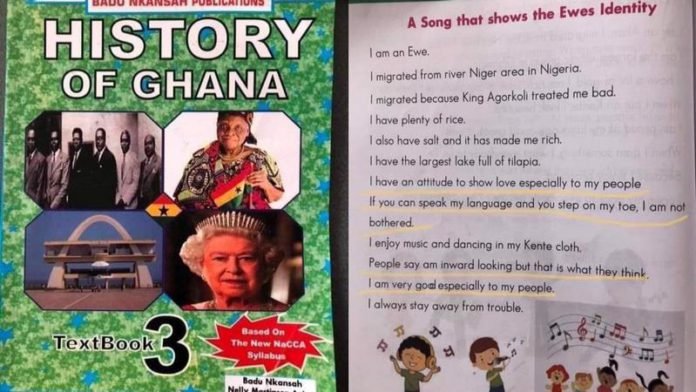 The New Patriotic Party (NPP) has condemned the publishers of the controversial textbooks for basic schools describing the materials as inept and incompetent.

The party’s Communications Director, Mr Yaw Buaben Asamoa said  “distortions of history and bigoted stereotyping of ethnic groups cannot be the basis upon which the social identity of our children is nurtured and established”. The statement added, “in our world today, there is no profit to ethnic dominance or subjugation considering the universal values that globalisation imposes on us.”

Current outrage after some people expressed disgust over portions of the textbook for primary schoolchildren which appears to denigrate Ewes and other tribes in the country. Following that, the NaCCA issued a statement to the effect that the books have not been approved for use. According to the NPP, “current global values project universal human rights, encompassing respect for all peoples irrespective of nationality, ethnicity, religion, culture or gender”, adding: “Economies are being built on digital technology and innovation, creativity and skills development”. “These are what will drive international competitiveness for Ghana and open opportunities for our young people to master their talents and fulfil their dreams”. “While we note that the National Council for Curriculum Accreditation (NaCCA) has not approved the publication, the NPP is urging them to refine and enforce their rules without fear or favour.”