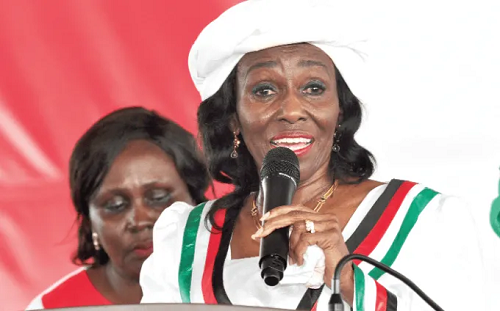 The Deputy General Secretary of the National Democratic Congress (NDC), Peter Boamah Otokunor, has said the party is open to discussing the return of Mrs Konadu Agyeman Rawlings if she applies to rejoin the party.

Speaking on Morning Starr, Monday 15th November 2021, the Deputy General Secretary in-Charge of Operation stated that Article 8 of the NDC’s constitution spells out how one can join the party.

According to him, the wife of the founder of the NDC would not be prevented from joining the NDC if she had a change of mind to rejoin just as she willingly resigned.

“The right to association is an inalienable right that has been bestowed to every citizen of this country and with such rights, its commission or omission can only be exercised by that person. So as we saw with Madam Konadu leaving the party, it was in exercise of her right that is why for now she is not a member of NDC and belongs to a different party.

“If she has realized that her action and her commission haven’t helped her in achieving her political or any objectives that she might have, it is just fair she comes back to the competition of the NDC. Relying on the republic of Ghana Constitution to commission, she can go through the procedure of becoming a member of the NDC. She has to apply and the leadership will consider the application and just follow the procedure,” he added.

The first born of the late former President Jerry John Rawlings, Zanetor Agyeman-Rawlings, has made a passionate call to the leadership of the National Democratic Congress (NDC) to make amends and bring back her mother, Nana Konadu Agyeman Rawlings to the party again.

Addressing a gathering to commemorate the first Anniversary of the passing of the former president on Friday, November 12, 2021, Zanetor indicated conflicts are part of humans but there is also reconciliation at a point.

“I want to use this opportunity to ask that as we remember the old man who we never expected to pass when he did, let’s make amends. Let us approach those we have wronged.

“At this juncture I would want to say what no one wants to hear. Nana Konadu Agyeman-Rawlings is an integral part of the party. Let us do all we can to bring her back. In every family there is conflict, but there are also elders who will mediate the conflict. We are calling on our elders, this is the time. We don’t know what tomorrow holds, but if we want victory to rescue the people of Ghana from their current situation, let us do what we have to do,” she requested.