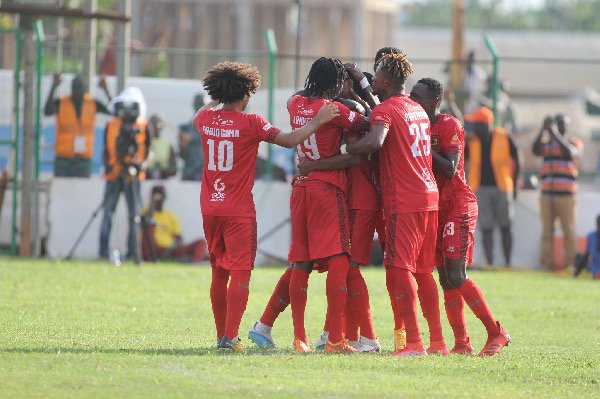 The Ghana Premier League continued this weekend as all the teams tried their best to glean all three points in week three of the league.

Asante Kotoko maintained their hundred percent win record this season after beating Bibiani Goldstars 1-0 at the Dun’s park on Friday. An Isaac Oppong curler ensured that the Porcupines took all three points from the home grounds of the ‘Gye Nyame Boys’.

On Saturday, Dreams FC inflicted a 3-1 victory over newly-promoted side Accra Lions when Agyenim Boateng scored a brace for the ‘Still Believe Boys’

Accra Great Olympics also managed to record a 1-0 away win over Legon Cities to maintain their unbeaten run in the league.

A brace from David Abagna secured the first-ever Premier League win this season for Real Tamale United as they beat WAFA. Abagna has now scored five goals this season.

For the first time in their history, King Faisal have recorded their first three wins in a season after edging out AshantiGold SC by 2-0 at the Baba Yara Stadium.

Bechem United also returned to winning ways after they were beaten last weekend by Kotoko. The Hunters hunted Elmina Sharks 2-0 at the Nana Fosu Gyeabour Park.

Anyinase-based club, Karela United also recorded their first win in the Premier League this season after they came back from a goal down to record a 2-1 victory against Berekum Chelsea on Sunday afternoon.

Techiman Eleven Wonders also drew 0-0 with Medeama Sporting club while Aduana Stars prevented Hearts of Oak from winning their first game of the season after holding the Phobians to a 1-1 drawn game at the Accra Sports Stadium on Sunday.