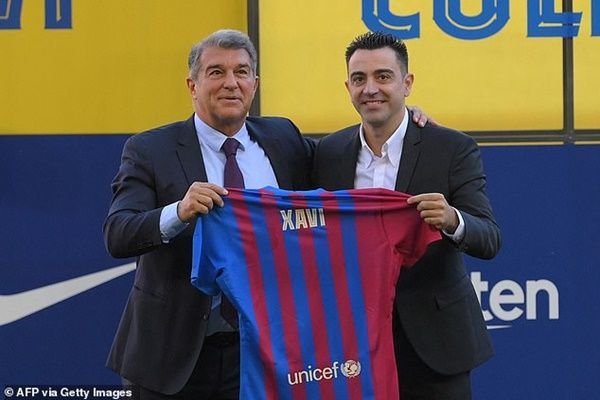 Xavi was officially presented to 10,000 adoring Barcelona fans at the Nou Camp on Monday afternoon and vowed to restore the club to its former glory.

Fans waited with baited breath before the iconic former midfielder emerged from the tunnel into the sunshine on the pitch with president Joan Laporta.

They waved their flags in unison and for a moment it seemed as though the 41-year-old was genuinely taken aback by the outpouring of support.

‘I don’t want to get too emotional,’ he told them. ‘So I can just tell you one thing – we are the best club in the world. And we will work with the highest standards to have success. We cannot accept defeats or draws, we have to win every game.’

‘We are going to work to try and win many titles, thank you very much, this is an emotional moment for me.

‘We need you. Especially during the bad moments. We are in a difficult situation as a club. We need you more than ever.’

Xavi then proceeded to sign a contract on a table that had been set up on the turf while his family and friends watched on a few metres away.

He then posed for pictures while holding up a Barcelona shirt with his name on the back.