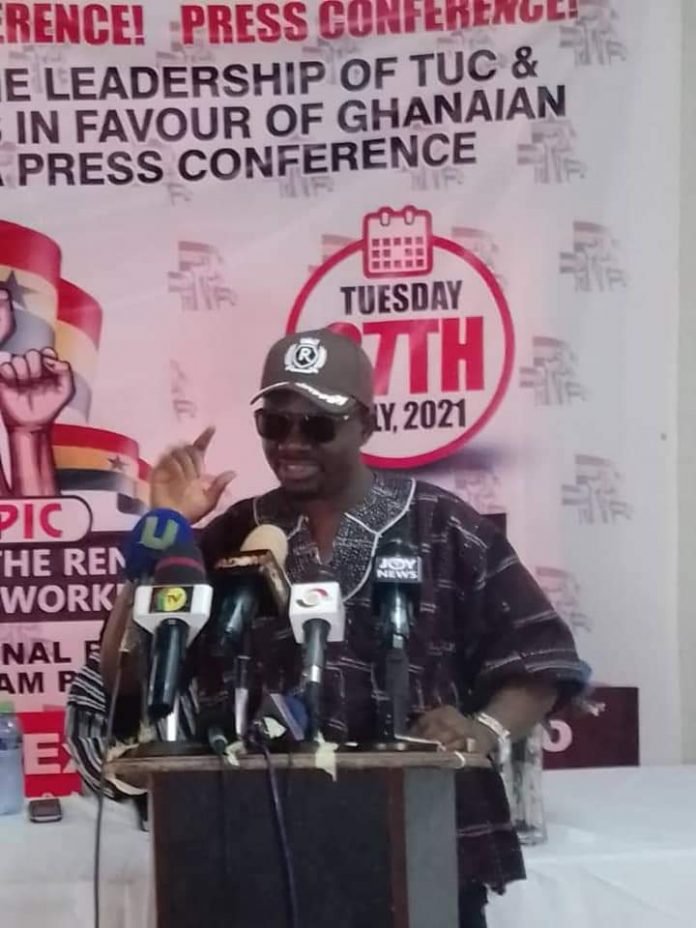 Coalition Against the Leadership of Trades Union Congress (TUC) and Organized Labour is threatening legal action against the government and Controller and Accountant General Department (CAGD) for giving December 1, 2021 as deadline for all government workers to register for the Ghana Card or risk not being paid.

According to the coalition, The National Identification Authority  (NIA) has failed to even account for the monies given to them for mass registration, secondly the NIA should have create a registration center for workers during the period to go through the process because government workers can’t wait for 8 hours in a que to register for the card.

In a statement issued in Accra and signed by the Executive Secretary for the Coalition Azubila Emmanuel Abdul-Salam, said, This should be done in consultation with workers who stand to benefit from the new system but not to use it as a means of denying them their pay.

Read the statement below:.

CAGD SHOULD NOT TAKE GOVERNMENT WORKERS FOR GRANTED JUST BECAUSE OUR UNION LEADERS ARE STOOGES TO GOVERNMENT. WE DESERVE SOME RESPECT, COALITION & ADAM-GH RESPONDED.

Currently it has become a norm that anytime the government wants to deal with workers in Ghana, it is always a threat to lay them off (retrenchment or redundancy) or a threat to stop paying workers salary as if it is by favor that we are paid and not our dedicated service to the country. This unfortunate disrespect is being meted out to workers of this country because our Union leaders who were supposed to fight for our interest are now yes men and women to the government due to their stomach. Union leaders have all the sudden lost their biting teeth and relevance to deal with government as stakeholders and not of vulnerability.
Our services to the country are non-negotiable and must be respected as such. As Unions we are paying our monthly dues to them to represent our interest and not to bid our interest with the government.

Our other biggest disappointment is the loud silence of the Trade Union Congress and Organised Labour after their abysmal performance at the tripartite committee meeting where they were compromised to accept 4% and 7% annual salary increment  for 2021 and 2022 respectively. Government is taking Ghanaian public sector workers for granted because of  the weak Union Leadership we have who have no space in their mouth to speak for the Ghanaian Public Sector Workers in the face of these trying moments in our labour lives  consistent with the objectives of  their very existence. Yes we know they have gone for our dues just 2 weeks ago from our salaries but that cannot and should not always  override these very pressing issues we have had to contend with as vulnerable public sector workers, one of the principal reasons you exist as workers unions.
Government needs to be reminded that her relationship with the Ghanaian Public Sector Workers is “A Contract Of Service And  Not A Contract of Servitude”.

We woke up to yet another disappointing if not demeaning statement from the outfit of the Controller and Accountant General’s Department to the already overburdened and despondent public sector workers to ensure they have their Ghana Cards available before the end of December 2021 or risk losing our salaries. Has the government not done enough harm or inflicted enough pains into the Ghanaian Civil service workers to spare us this needle agony? You pursued your own flagship policy of ensuring that every Ghanaian from the age of 15 and above secures Ghana card and by your own projection 15 million Ghanaian should have been put on this platform before the end of the first phase. We also know the challenges that bedeviled this exercise with its concomitant logistical constraints despite huge sums of money given to NIA leading to long queues with many Ghanaians being denied access to this card through no fault of theirs with a number of Ghanaian Public Sector Workers inclusive.

Ghana Government and National Identification Authority NIA spent $2.1 billion U.S. dollars for this new Ghana card registration. The CEO of NIA came out and said they did not spend all the $2.1 billion U.S. dollars but rather they spent  $293 Million U.S. dollars for the Ghana card registration. You increased workers salary by just 4% against current high cost of living and yet you compel these suffering Ghanaian workers to cough out Ghc250.00 each to Register for Ghana card or risk being paid by December 2021. Are Ghanaiaan public sector workers not part of the USD 293 million dollars spent for registering Ghanaians?
So if today the government comes out to suggest one’s qualifications to earn salary is tied to the acquisition of a Ghana Card and coupled with the monthly validation carried out on workers to justify their pay claim then to what end is this new demand from the Government? Particularly given the hell one goes through to get a Ghana Card in this country relative to the limited period given workers for compliance.

We first and foremost want to remind the Government of the need to put a stop to what is becoming a culture of disrespect to the Ghanaian Civil servants and begin to see us as partners in the country’s development and not slaves. Therefore whatever is the reason informing the decision of the government to roll out this exercise, we suggest ample time is not only given workers- say from January to April- but exclusive arrangements be made for the Ghanaian Public Sector Worker  to avert the needless stress and difficulties naturally associated with the exercise. Again we suggest a special time table be evolved for workers to carry out this exercise with little or no interference with our working hours. Let it be made known to the Government that the Ghanaian Public Sector Worker will not be able to afford a dime for this Ghana Card exercise since it is through no fault of us not to have one.
We have already gone through hell with the validation exercise in the past where most of us had our salaries deferred for months in the name of not having gone through the exercise thereby having  to live a very torrid life with our families. If it is for the government to want to buy time because there is no money to pay us even with the paltry 4% and wants to eliminate some of our members by rough tactics in order to buy time to mobilise, then better let us know else this directive does not make any sense to us.

We therefore call on the Controller and Accountants General’s Department, National identification Authority, National Labour Commission, The Trade Union Congress, Organised Labour and other major stakeholders in our labour front  to engage further on these matter, especially with the timelines and rather  come out with a more  appropriate, friendly and human- face measures in respect of this directive in order that the dignity and respect of the Government worker is upheld in such decisions affecting them.
We as Government workers are not begging the Government or Controller and Accountant General for pay because it is a contract between us and the government for work done. Government can not tie our monthly salary to a Ghana card which was not part of our contractual agreement. Introducing transformation to the pay system is a good thing to help improve security of our pay system and enhance  controller and Accountant General Department activities to regulate our salaries.
This should be done in  consultation with workers who stand to benefit from the new system but not to use it as a means of denying us our pay.

If the government dares go ahead with this directive, we as a Coalition will take legal action against the controller and Accountant General Department and Government for the damage caused to the affected workers.