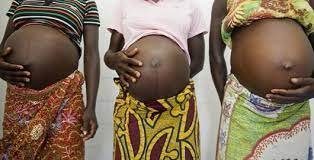 Two underaged roommates have been involved in a heated rebuttal while giving shocking details of their hitherto sexual escapades and subsequent pregnancy.

Despite agreeing that he is responsible for the 16-year-old girl’s pregnancy, 14-year-old Kenneth has refused to accept that he started their sexual acts.

Both families have sworn to make heads roll, to the point of involving deities to ascertain which of the ‘lovers’ accounts is the truth.

However, the soon-to-be parents have given their own narration.

The girl recounted that she woke up from her afternoon nap one day to discover the boy on top of her, already at the peak of the sexual act.

After the deed, she said the accused boy gagged her while on his knees, amid tears, and pleaded with her not to inform their parents.

What she thought was a one-time ‘sweet mistake’ happened again the very next day, although she was then wide awake.

She narrated how she was involved in a bed fight with the boy, and before she knew it, clothes were off and then again, another romp.

The boy who swore that his own version of the story was the truth detailed that on that fateful day, he returned from school to meet a partially nude girl on his bed.

Without any hesitation, he said the girl began caressing and seducing him until he eventually gave up.

He said she repeated the action consecutively for weeks until she missed her period.

The families involved are each supporting their wards and are currently at loggerheads.

In Ghana, adolescents represent 22.4% of the total population. The rates of teenage pregnancies are high. Thirty percent (30%) of all births registered in Ghana in 2014, were by adolescents, and 14% of adolescents aged between 15 and 19 years had begun childbearing