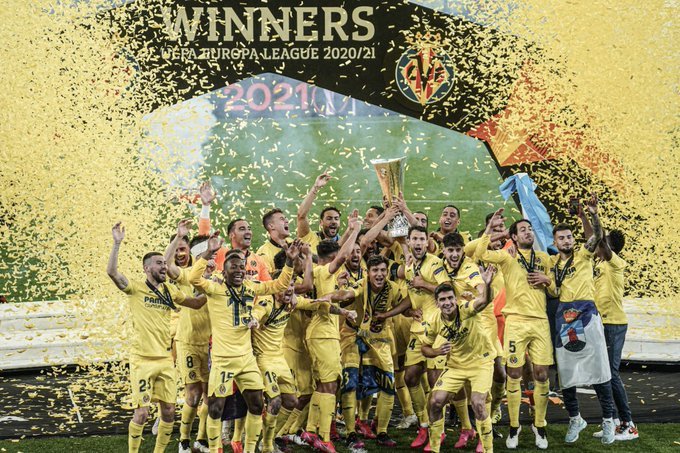 Manchester United must wait to win a first trophy under Ole Gunnar Solskjaer following a dramatic penalty shoot-out defeat to Villarreal in the Europa League final in Gdansk.

The Red Devils were made to pay for not making the most of their dominance as they lost 11-10 on spot kicks after the game had finished 1-1.

oalkeeper Geronimo Rulli was the Villarreal hero as he scored his penalty and then saved David de Gea’s kick after all of the outfield players found the net in a high calibre shoot-out that was in stark contrast to the quality of the match that preceded it.

The Red Devils dominated possession for long spells during normal time but were stunned on 29 minutes when Gerard Moreno met a left-wing free-kick to break the deadlock with his 30th goal of the season.

The opener once again highlighted United’s weakness defending set-pieces in the absence of injured skipper, Harry Maguire, who remained an unused substitute throughout the clash in Poland.

Solskjaer’s men improved greatly following the break and levelled on 55 minutes when Edinson Cavani pounced to lash home a deflected shot from distance.

United continued to pose the greater threat but Villarreal stood firm to force extra time and then stole the glory after an epic run of penalties.

The victory means Villarreal, who finished seventh in La Liga, claimed the trophy in their first appearance in a major European final and ensures they will compete in the Champions League group stage next season. It also sees Unai Emery become the first manager to win the competition four times. United will lament an inability to break down a stubborn rearguard action and will have to take solace in finishing second in the Premier League after ending another campaign without silverware.

Abandon England and play for Ghana – Akufo-Addo to Hudson-Odoi