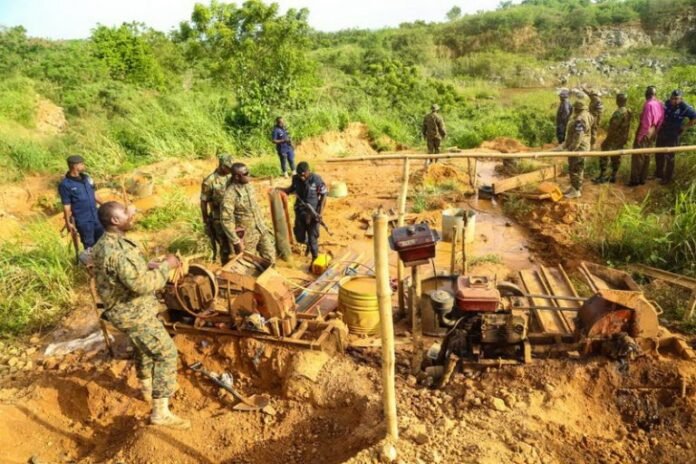 There was chaos at Akyem Akanteng in West Akyem Municipality in the Eastern region Tuesday morning when some persons purported to be operatives of the National Security sneaked into the Atewa Forest to allegedly mine gold.

The suspicious residents together with forestry guards who were later informed about their entry also entered the forest and managed to arrest 15 of the alleged National Security Operatives who were in the forest and handed them over to the Kade District Police Command for further investigation.

The alleged discovery has led mad rush by illegal miners mostly from Akwatia, Obuasi in Ashanti Region and Tarkwa in Western Region who come with armed men in Commercial vehicles to the forest.

The community together with the municipal Security council has been clamping down on them.

He, however, said a week ago, a group of armed men in Tundra Vehicle led by one Faisal who claimed to be national security operatives from Jubilee House stormed the community and seized quantities of gold gathered by the illegal miners amidst sporadic gunshot and arrested some of the illegal miners.

The Assembly Member said while they were engaging with the “National Security Operatives “, another team led by one Barfuor Asare who also claimed to be chairman of Small-Scale Mining at the Presidency arrived. He said the national security team absconded with the gold and the Tundra when the Chiefs attempted to engage both groups about their mission. According to the Assembly Member, the previous incident made the youth suspicious of the new group of national security operatives who entered the forest this dawn hence their arrest.