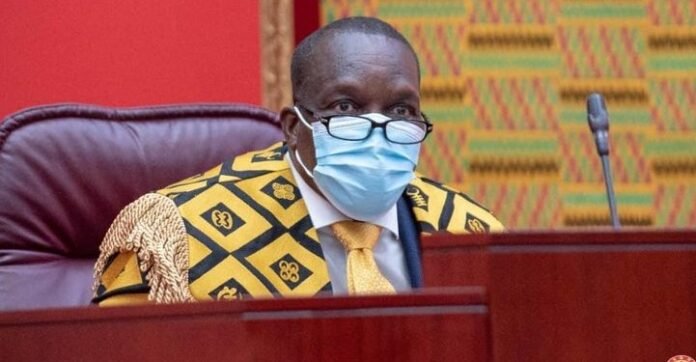 Rt. Hon. Alban Sumana Kingsford Bagbin, Speaker of Parliament says his commitment is towards serving the nation, rather than doing the bidding of the political party he belongs to — the National Democratic Congress (NDC). Mr. Bagbin thus assured Ghanaians that he would discharge his duties as required by law.

“Now, I don’t belong to any party. I’m the Speaker of Ghana. I’m not a Speaker of NPP. I’m not a Speaker of NDC. I’m the Speaker of Ghana. And I must hold the balance. My duty is to ensure that there’s an even playing field and the decision is taken, and I announce it. That is all.” “And, so, if you sit down and look at me and think that maybe you were my girlfriend before [and, therefore] I should give you an advantage over another who I’ve never met, please, then don’t come to me; you won’t get it. Let’s finish; after work, we can do that business together. Not when I’m working. That’s my nature; that’s how I’ve been up to this time and, so, it’s unfortunate that these things are happening,” he said.

He was reacting to some accusations levelled against him and some members of the Minority caucus in Parliament by the National Communications Officer of the NDC, Sammy Gyamfi that they betrayed the party by approving three of Akufo-Addo’s ministerial nominees whom they had earlier raised red flags against during their vetting. It would be recalled that Parliament, three weeks ago, voted to approve the nominations of three ministerial nominees of President Akufo-Addo who according to the NDC party, should have been rejected by the Minority in Parliament.

In comments on Facebook, Mr. Gyamfi described the approval of the minister-nominees as a betrayal. In his remarks, Sammy Gyamfi singled out the Minority Leader, Haruna Iddrisu; the Minority Chief Whip, Muntaka Mubarak and even the NDC-backed Speaker of Parliament, Alban Bagbin. “They brazenly defied the leadership of the party and betrayed the collective good for their selfish interest,” Mr. Gyamfi said. Mr.Gyamfi also added that “we have a Speaker who rode on the back of the NDC into the office to pursue his own parochial agenda and nothing more”.