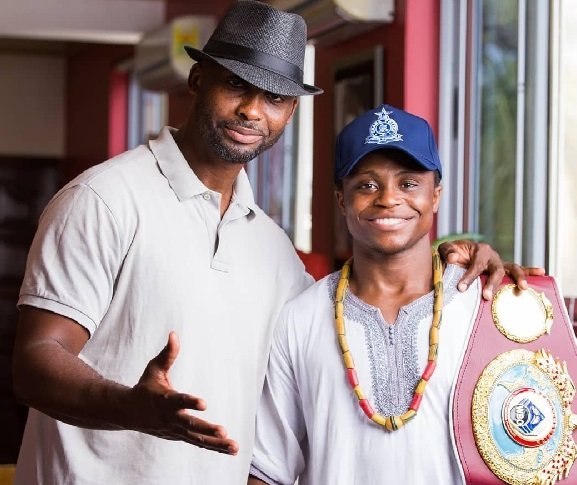 Ghana’s young Boxing sensation Isaac Dogboe has revealed that he is no longer under the management of his father Paul Dogboe.

The former WBO super bantamweight champion Isaac “Royal Storm” Dogboe, who has been inactive in the ring since his last bout in July 2020 made this revelation in an exclusive interview with GhOne TV when quizzed on his relationship with his father in view of recent comments the father made in reaction to a social media post he made.

The 26-year-old said he is currently working by himself after parting ways with his father Paul Dogboe, who has managed him since the start of his boxing career. He, however, insisted there were no grudges between himself and his dad.

“Right now I’m self-managed, no more managed by my dad, a lot happened over the years and since I took control I said to myself, It’s time to restructure and rebuild some of the bridges that were broken.”

“A lot of people are putting our situation in a negative light. The only thing happening between my father and me is that he’s no more training and managing me and I don’t see anything negative about that”, he said

“I informed him of my decision to want to be in charge and everything is fine, I hold my family in very high esteem. I believe if there’s any problem between myself and my father, I believe he can call and sit me down as a son and talk to me.”

The British-Ghanaian orthodox boxer added: “My father has done a great job. He deserves all the praise.”
“He’s nurtured me from the beginning and if he wasn’t part of my life, Isaac Dogboe won’t be Isaac Dogboe.”

Meanwhile, Paul Dogboe reacting to the decision of his son to part ways with him on Starr FM claimed he had no issues with Isaac Dogboe except with the way he went about the situation.

“I’m not angry that Isaac said I can’t manage him anymore but the way he went about it upset me a little bit, he just sent me a text one day informing of his decision,” he said.

“I asked myself, what if I spent all my time and money with him and had nothing, he’d have screwed me over with this decision”

Paul Dogboe also emphasised that his son Isaac breaking away from him isn’t anything wrong but then he would have to earn a good foundation to avoid failing.

“The decision he took is not a bad idea but he has to find his footing. He has to make sure he makes it. It’s a challenge to him but I don’t think he’s going to fail. He can’t fail,” Paul added.

“Isaac Dogboe will do well because he’s got everything. The foundation is good so if he does things well, he’s going to excel and I wish him well”

Paul Dogboe had been the trainer and manager of his son Isaac Dogboe since he started boxing.