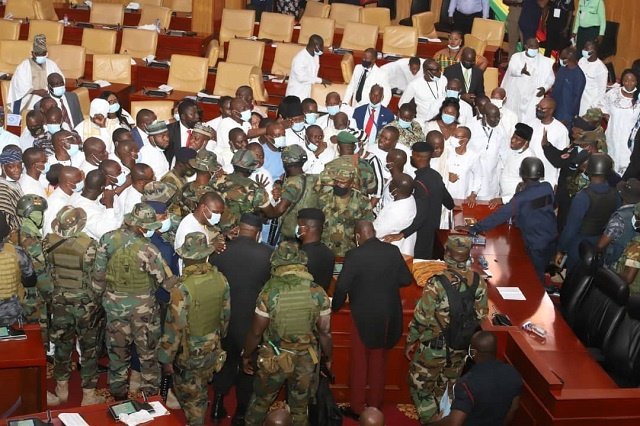 The African Centre for Parliamentary Affairs (ACEPA) has called for sanctions against persons who incited the military invasion of Parliament.

Armed soldiers on Thursday stormed the Chamber, following the continued failure of the Members of Parliament to elect a Speaker for the eighth Parliament.

The soldiers, numbering about 20, emerged in the Chamber together with armed policemen ostensibly to restore calm.

He said the Military High Command should also be queried for the circumstances that led to the presence of armed military personnel in the House.

“When you see the military entering Parliament, immediately what comes to your mind is that this is another coup. For me, I even blame the military hierarchy. They are there to defend the constitution not to defend the interest of any particular individual. The governments are going to change whether we like it or not. I think our political actors have to be very careful.

“We have to get things done in the right way. So whoever gave the instruction, whoever brought the military in, I believe that some serious action has to be taken because our constitution is clear on situations like this.”

Aside from the invasion of the military, there were several disruptions in Parliament including the snatching of ballot boxes and the NDC MPs sitting on the right side of the Speaker to indicate that they were on the majority side of Parliament.

These developments have been condemned by some persons including former President, John Dramani Mahama who has called for investigations into the development.

According to John Mahama, the developments proved to “low point(s)” in Ghana’s democratic practice.

“The events of last night stretching into the morning of 7th January have been both a great occasion for Ghana’s democracy and at the same time a day of infamy, which will go down as a low point in our democratic practice,” he indicated.

Government could be forced to reintroduce COVID-19 restrictions – Oppong Nkrumah