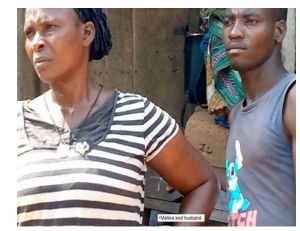 NIGERIA: A mother has confessed to having sex with her biological son just to have a baby for her husband.

Matina Agawua, a native of Yelwata, in Nasarawa State lost her first husband to herdsmen attack in Northern Nigeria. Her first marriage produced a son.

She remarried years after the death of her husband but had difficulties having a child with her second husband, Mr James. After six years of marriage with no child, Matina started getting pressured by her mother-in-law and her current husband to have a child or the marriage will be over.

Matina’s husband threatened to take a new wife and this bothered Matina because she and her husband had contributed money to build the house they live in, with Matina providing a greater share. It troubled Matina to have another woman living in the house she built with her husband.

As a result, Matina decided to have sex with her teenage son from her first marriage to see if she could have a child for her second husband.

“We had been married for more than six years but were still childless due to my husband’s fault, according to doctor’s report, and I was hearing from the grapevine that he was planning to take a second wife on the grounds that I could not give him a child,” Matina told The Nation.

Matina told the publication that she had undergone a test on her own since her husband refused to go for one, and the result showed that there was nothing wrong with her medically.

To prove that she is fertile, she decided to lure her own son, a student in Akwanga, into a secret affair, while warning him to keep it secret.

She told The Nation: “Since he is not comfortable with us going for medical checkup on the assumption that nothing was wrong with him, I decided to convince my little son, who is just about 16 years old and schooling in Akwanga.

“I visited him regularly. He stays in a private apartment with my relatives, so I was going there to spend some time with them, especially on weekends when my market is off. “It was actually difficult making love with my own son, but circumstances forced me to go into it. I needed to be sure of my fertility.

“I know my husband very well. If he discovered I had an affair with a man outside, he would kill me.

“I love him so much and I’m afraid of him, so this evil plan kept ringing in my mind to know how fertile I am.

“I tried to visit my son in Akwanga mostly when I was on my ovulation period. I decided to develop a crush on him and draw him very close to me. We got intimate and ended up having sex.

“One faithful day while I was on my ovulation period, I visited him. It was at about 11pm. I held his hand and made him sit beside me.

“I asked him if he had ever had sex and he said no. I held him in my arms. This time, I felt warm and I think he too did.

“After that night, I felt extremely embarrassed, and guilty that I committed such an abomination with my own son.

“It was actually a taboo, but I warned him to keep it secret.”

After intercourse with her son in Jan 2022, she said she missed her period that same month and a test confirmed she was pregnant.

However, when she shared the news with her husband, he suspected foul play. He reminded her that they have not had sex for three months and inisisted he is not responsible for the pregnancy.

Mr James accused Matina of adultry and threatened to kill her, so she confessed to having sex with her son.

Matina’s son was questioned and he confessed to the sex act with his mother.

Matina told the publication: “I am not a loose woman. I am just a woman who loves her husband very much and didn’t want to hurt or lose him.

“I did what I did to save my marriage. I got reliable information that he was planning to take a second wife on the advice of his parents and that the wife would occupy one of the apartments we suffered to build together.

“I was not comfortable with that idea and felt I could test my fertility with my son and impose it on him.

“Look at my age. I’m not getting younger and my husband was not prepared to address the matter medically.

“Look at the result of the test; it shows low sperm count. There is no way he would have been able to impregnate me.

“I know I was doing the wrong thing and betraying my husband, but I saw it as a lesser evil than going outside.

“Now the man is even threatening to kill my son for impregnating me, so I had to move my son out of Akwanga and take him somewhere else to save his life.

“This is more so because I was the one who put him into the whole mess. I have to protect him.”

Matina’s husband insisted he would not accept a pregnancy that is not his.

Matina fears her husband may kill her and has left the house for him.

However, she says she intends to engage a lawyer to fight for the house since she contributed a larger share in building it.

“I will engage a lawyer if my husband tries to do anything funny. He should not take me for granted as I’m prepared for him,” she told The Nation.

“He can’t father a child. His sperm count is very low and he is not ready to address it. What does he want me to do?”

She added that she will not abort the baby she made with her son.

She said: “I won’t abort it. Rather, I will allow it and deliver my baby.  I have been looking for it for long, so I won’t let it go. It belongs to my son.

“I have decided to keep it because it is blood within my blood. I will keep it. All I want is that since the marriage didn’t work, we should sell the house, share the proceeds and everyone will go his way.”

The husband expressed his dissapointment at his wife’s action.

“How can she allow her son to impregnate her and try to foist it on me? How would she do that? That is my anger,” he said.

“But if she is ready to go, let her go. We built the house together and whatever she wants, I don’t have an issue with that.”