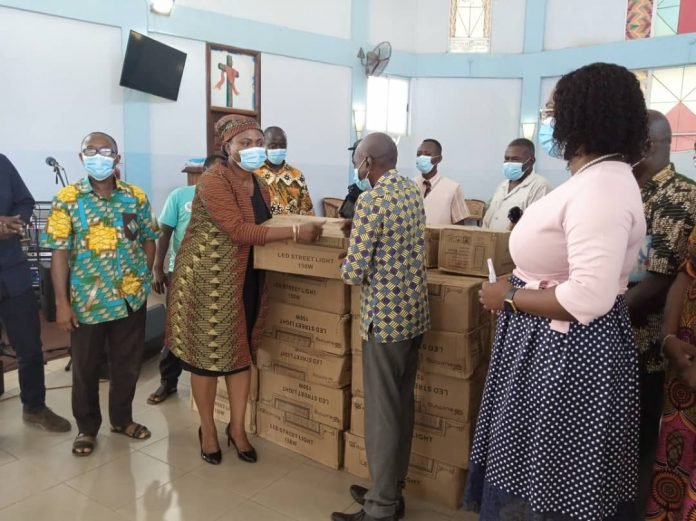 The Ga East Municipal Assembly held its first town hall meeting today Thursday, 25th November 2021 for the year 2022 at the Haatso Presbyterian Church of Ghana. The meeting According to the MCE was to take stock of the activities and projects undertaken by the assembly for the year 2021.

The Chief Executive (MCE) called for the active involvement of all persons living in communities under her jurisdiction, in discussions relating to the development of the Municipality. She said their constant engagement with the Municipal Assembly, would bring forth important ideas, decisions, and pinpoint the actual needs of their communities to be addressed. The MCE, madam Elizabeth Kaakie Mann said the focus of the assembly is to improve the general sanitation, educational facilities for quality education, and the general security in the municipality, create jobs for the people especially for the youth and women, improve revenue mobilization and customer service standards as well as promote participatory preparation of medium- term development plan for 2022 to 2025.

Hon. Elizabeth Kaakie Mann also donated series of street lights to selected 21 residents association who in their engagement with the Assembly requested for street lights to reduce robbery and criminal activities in their communities. Madam Kaakie pledge to supply the residents association with more bulbs to help fight crime and criminal activities within the municipality. She said the developments being expected in the Municipality would only be achieved through unity in purpose, and advised the people to remain united and not to entertain any form of violence from any person or group. According to the MCE, indiscriminate disposal of waste, non-payment of property rates, business operating permits, allocation of building permits and building at unauthorized areas were major challenges militating against the programs and activities of the assembly and called on stakeholders to honour their responsibilities to move the assembly forward. The MCE, said despite the fact that the outbreak of the COVID-19 pandemic, distorted several of the Assembly’s planned programmes for 2020, /2021, some people benefited from the social support provided by the government to the needy during the lockdown era and beyond, to mitigate the hardships brought about by the pandemic.
Madam Kaakie said within the year under review, the Assembly completed 15 of its 18 educational projects, with the remaining three still ongoing, constructed seven culverts and five bridges, completed four out of its six health projects, while ensuring constant engagements with Resident Associations to know their needs.

In an interview with Vision1 Fm Kofi Yesu, the Ga East National Disaster Management Organization (NADMO) says it will go in partnership with the water and sanitation department in the Ga East Municipality to organize sensitization exercise under the “Advocacy and Capacity Building on Disaster Risk Reduction (DRR)” project funded by the Ga East Municipality. According to the Ga East Municipal NADMO Director, Seth Osei-Kissi, One of the main goals of the project is to reduce disaster risks through awareness creation at all levels of the society. In this connection, NADMO developed fire safety and flood awareness materials (leaflets) focusing on disasters in urban settings, which NADMO is now disseminating in a series of sensitization activities that include TV/radio discussions and engagement of schools within the Ga East Municipality. Participants at the Meeting included Assembly Members from Agbogba, Taifa, Dome West, Abokobi, Kwabenya, Unit Committee Members, Government Appointees to the Assembly, Leaders from the various markets in the Municipality with some of their members, and Resident Associations.