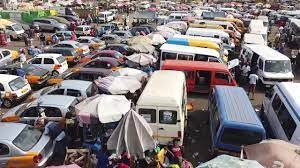 All members of the Ghana Private Road Transport Union (GPRTU), will from today, Tuesday, November 23, 2021, wear red armbands as a protest signal to alert the government of its intended strike on Monday, November 29, 2021.

Head of Communications for GPRTU, Abass Moro says the action is to compel the government to reduce the price of a liter of fuel by GHS 1.50.Speaking to Vision1 FM Kofi Yesu on phone interview, Abass Moro said members of his union will embark on an indefinite strike if the government fails to address their demands by Sunday. Abass Moro said Drivers of commercial cars, tipper trucks, articulators, and cargo trucks should wear red bands because we are fighting.

So come Sunday, if our problem is not resolved, we have no option than to send the signal that from Monday, no commercial vehicle will be working. In any case, if you are outside Accra, it is up to you to decide on when you return before we begin the strike. In Ghana, this has led to petrol, for example, reaching as high as GHS 6.990 per liter which have led to threats to increase transport fares. The Coalition of Private Transport Operators last week threatened to embark on a strike over the many taxes on petroleum products, which they blame for the high fuel prices, but the action was called off after a meeting with the government.