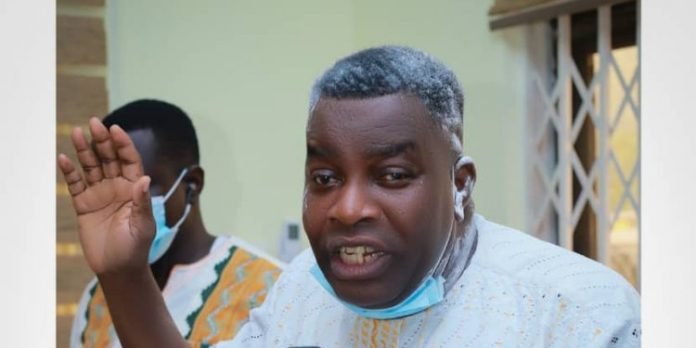 The first District Chief Executive (DCE) for the newly created Guan District in the Oti Region, Marlon Anipa, has died.

Mr. Anipa passed away at the Hohoe Municipal Hospital after taking ill in the late hours of Monday, November 15, 2021.

Unconfirmed reports say he may have died from a heart attack.

He was earlier seen visiting some BECE candidates and calling on stakeholders of the enclave in a familiarization activity.

The one-time Parliamentary Candidate for the Hohoe Constituency was a known member of the NPP who is said to be close friends with President Nana Akufo-Addo.

Mr. Anipa was later appointed DCE for the newly created Guan District and sworn into office on 5th November 2021. He received a unanimous endorsement of all 19 members of the Guan District Assembly.

The Guan District is made up of the Santrokofi, Akpafu, Lolobi, and Likpe communities which were carved out of the Hohoe Municipality and Constituency to form part of the newly created Oti Region in 2018.

The area also known as the SALL enclave has been left without a representative in parliament. The creation of the Guan district and the appointment of one of their own thus came as a respite to the people.

The Assembly Member for Santeokofi Gbordome, Philip Adom, said the news of Mr. Anipa’s demise comes as a shock to the people of the area.

“We are very shocked by the news of Mr. Marlon’s death. His appointment brought hope to our people, only for him to leave us this way. We can only wish him eternal rest in the Lord” Philip Adom told Citi News.