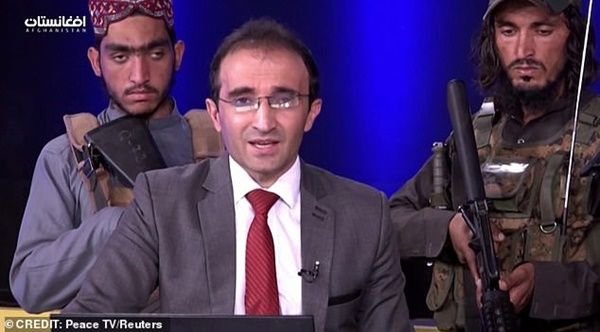 This is the shocking moment an Afghan TV news presenter reads out the headlines while surrounded by armed Taliban thugs.

The clip was shared online by the TV studio after the militants stormed the building and demanded the news anchor praise the Taliban. BBC’s Yalda Hakim tweeted a video clip of the news report on Sunday afternoon and wrote: ‘Afghanistan TV – surreal.

This is what a political debate now looks like on Afghan TV, Taliban foot soldiers watching over the host.

‘The presenter talks about the collapse of the Ghani govt & says the Islamic Emirate says the Afghan people should not to be afraid #Afghanistan.’

In the 42-second clip, which has since been viewed more than 1million times, the news anchor is surrounded by eight armed men who appear to be guarding him as he reads.

It has been reported they stormed the building on Sunday and demanded the presenter speak with them.