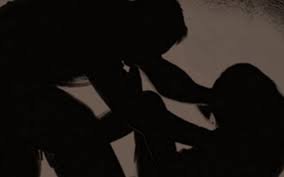 A 45 year old painter John Afful is in the grips the police after he defiled a 6 year old girl at Sowutum , a suburb in Accra.

According to the police, on 28th August, 2021, at about 1500 hrs, the victim and her 8year old brother, neighbors to the suspect, were playing around their house when they came across the suspect, seated in front of a shop, close to their house. Suspect John Arthur offered his mobile phone to the victim’s brother to play a game, whilst he carried the victim onto his laps.

The police say whilst the victim’s brother’s attention was on the game, the suspect defiled the victim.

Unknown to the suspect, a neighbor who was watching the act from afar, secretly recorded the entire act on video and rushed to rescue the victim and subsequently reported the incident to the victim’s parents

The parents together with other neighbors in the area caused the arrest of the suspect and a complaint was made at the Sowutuom Police station.

At the Police station, suspect John Arthur denied having defiled the victim. .

Police say an investigation has been lunched into and the suspect being arraigned before court.