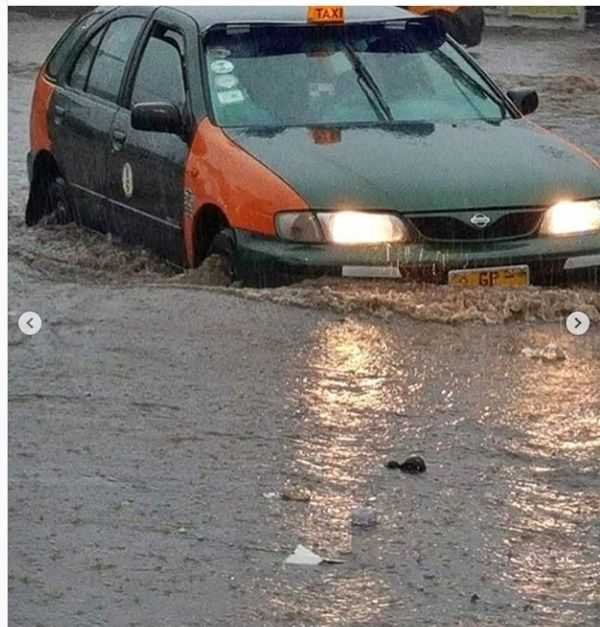 The downpour flooded many areas as the main drainage system in the municipality overflew its banks. The drains could not carry huge volumes of water because they were choked with sand, black polythene bags and plastic materials. A house affected by the flood

The affected areas included Alhaji Issah Contractor, Achiguda, Mallam Fari, Musco, Alaafia and Zongo market areas, all in Community A, B and C electoral areas in the Koforidua Zongo. The floods destroyed property worth thousands of cedis and displaced scores of people from their homes, and they had to stay with their friends and other relatives to keep safe. Residents spent hours scooping the water that entered their rooms and shops, as well as containers and kitchens. One of the affected houses inundated with flood waters

Some affected residents expressed concern about the situation and appealed to the government to come to their aid to find a lasting solution to the perennial flooding in the municipality. A resident, Hajia Nafisah Abdulai, said she had been badly affected by the floods. She said some of her belongings had also been destroyed while others were carried away by the flood waters, making it very difficult for her to make ends meet. “I have severally reported the flooding situation in the area to the Municipal Chief Executive (MCE) for New Juaben South, Mr Isaac Appaw-Gyasi,  but no action has been taken yet. She appealed to the government to immediately construct proper drains in the area to stop the perennial flooding that confronted the zongo community. According to her, it was not the first time the area had been flooded, adding that she had spent the night collecting water which had entered her kitchen and room destroying many valuable things. A tenant trying to redirect the flood waters from her home

Meanwhile, Mr Appaw-Gyasi stated that the assembly was still committed to securing funding to construct the main drainage system to address the perennial flooding situation in the areas affected. He also attributed the flooding to the inability of the drains in the areas to take in water because they had been choked as a result of human activities such as throwing of polythene bags, refuse, plastic materials in the drains. He said the assembly was working hard to tackle the flooding problems in the affected areas. Mr Appaw-Gyasi advised the residents  as well as the entire zongo community, to stop throwing plastic materials and refuse into the drains.

The Eastern Regional Director of the National Disaster Management Organisation (NADMO), Mr Kwame Appiah Kodua, he said his outfit was not aware of the flooding. He, however, directed the municipal officer to liaise with the zonal coordinators to quickly move to the affected areas to assess the extent of damage caused by the rain to know what help NADMO could offer.