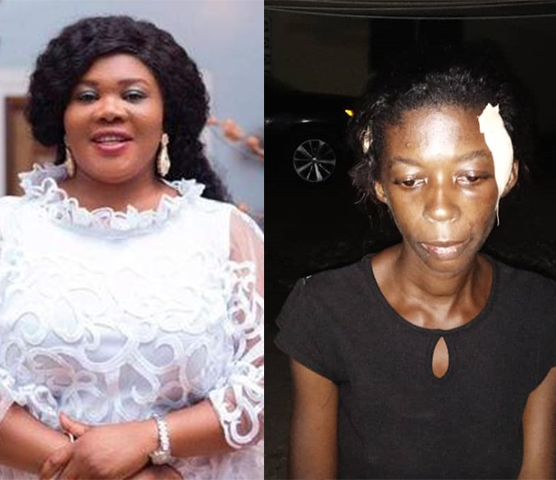 A four months pregnant woman, Madam Afi Charlotte, a hairdresser, who was nearly killed by her hammer-wielding ex-husband has received support and medical bills from the Member of parliament for krowor constituency Agnes Naa Momo Lartey.

The support from the MP was done on her behalf by the constituency chairman of the NDC Wradi Bortey and some executives of the party on Wednesday April 14th 2021 at about 8:30pm.

Sister of the victim who only gave her name as Mansa at Nkpong Neighbourhood at Nungua in the Krowor Municipality of the greater Accra Region (where the bloody incident took place) intervened to save the situation, avoiding the worse to happen.

The incident happened,12th April, 2021, around 11:00 am. From the Afi’s Sister, named the rampaging ex-husband as David Atigah.

Miss Mansa continued that: “the man, who’s having a child with the victim, forced his way into the ex-wife’s room, by breaking the door”.

Madam Afi Charlotte, is believed to be living alone with her child from her marriage with David for the past five years after parting ways with him.

According to Madam Charlotte, she is four months pregnant for another man who resides elsewhere, far from her vicinity.

She continued that: ‘I was far asleep when David broke my door and flung himself on me, in an attempt to beat me”.

She continued: “he then held my neck strangling me, threatening to kill me before he can be free. As I struggled with him, I kept on shouting for help, then my sister came to my rescue. Else it would have been a different story by now”.

According to the sister, the man had come with an unmarked Taxi cab (without a number plate), and with him were other men.

When the pregnant woman in a company of her elder sisters were on their way to Nungua Divisional police station to lodge a complain about the assault, the man reappeared and struck Madam Charlotte in the head with a hammer, resulting in her bleeding profusely.

In retaliation, the sisters of the victim wanted to attack the ex-husband, David, by smashing the windscreen of the Taxi cab that brought him. This attracted more onlookers from the vicinity who calmed the situation down.

The pregnant woman quickly lodged her complain at the Nungua Divisional police station and was issued a medical report to go to Nungua Adegonno poly Clinic for healthcare. But the enormity of her injury coupled with her pregnancy meant she was referred to Main Lekma hospital for special care.

At the time of writing this report, the said police station had confirmed the lodging of the case and yet to begin investigation to ascertain what really had led to this bloody attack on the pregnant woman.

Reports has it that the CID on the case has not yet come to the crime scene, as at 4:00pm, to effect the arrest of the suspect, and that David is walking about freely.

But upon hearing the incident the MP for the area and a mother herself, quickly gone to the rescue to support and pay the medical bills for Charlotte Afi.

Speaking to www.vision1fm.com after receiving the support from Hon. Agnes Naa Momo Lartey, Afia Charlotte thanked the MP for kind gesture in the time of her needs and appealled to the domestic violence and victims support unit of Ghana police service, and the Gender ministry, to intervene, because she is not safe with her life and that of her pregnancy.