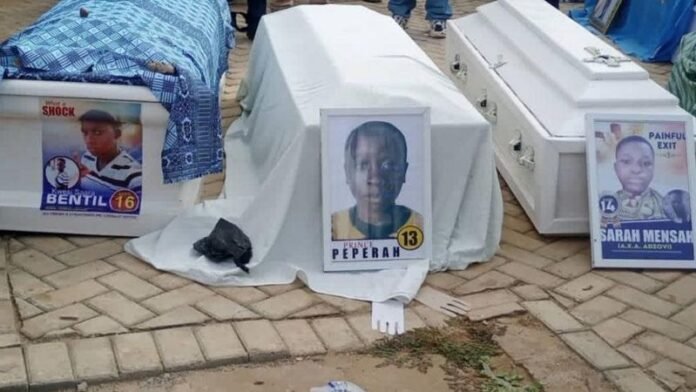 Joint burial for the 13 children who drowned while swimming in the sea at Apam in the Central region is currently happening.

Families, friends and sympathisers of the teenagers who lost their lives while swimming at the sea in Apam have been shedding tears and still in a state of shock. Ahead of the burial service, the Gomoa Akyemepim Traditional Council performed rituals to appease the gods of the land ahead. One cow, three sheep, 12 fowls, 33 tubers of yam, and three cartons of schnapps were offered to the gods by a traditional priest on Monday, March 15, 2021.

There are fears the teenagers defied the laws of the land by swimming at a place that is the preserve of the gods. The burial service was originally scheduled for Thursday, March 11 but had to be postponed for the rituals to be performed by the community leaders. President Akuffo-Addo offered a GHC36,000 donation to the traditional council and bereaved families while former President John Mahama supported them with GHC10,000.

The burial service is being led by the Gomoa traditional Council of the area. The incident happened on Sunday, March 7, 2021.