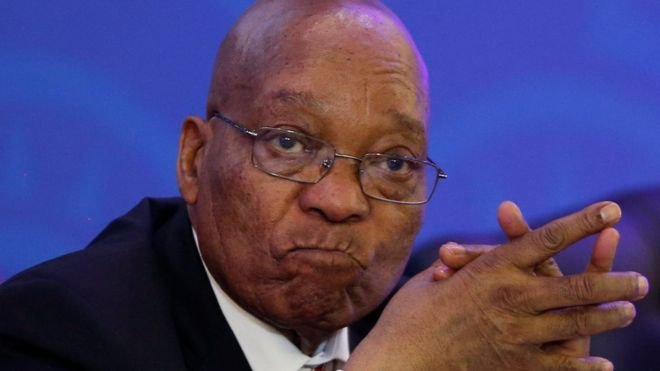 A South African judge says he wants ex-President Jacob Zuma to be given a jail sentence for failing to appear before him to answer corruption allegations.

Mr Zuma, 79, ignored a summons to appear before a commission of inquiry being chaired by Justice Ray Zondo.

The judge said Mr Zuma’s defiance could lead to lawlessness, and he would ask South Africa’s highest court to convict the ex-president of contempt.

Mr Zuma said he believed that Justice Zondo was biased against him.

He previously asked the judge to step down as chair of the inquiry.

Justice Zondo rejected the request and said he was doing his job impartially.

At least 40 witnesses have implicated Mr Zuma in corruption.

Among the allegations against him is that during his term in office, he allowed the wealthy Gupta family to plunder state resources and to influence policy and cabinet appointments.

Both Mr Zuma and the Guptas deny any wrongdoing.

The Constitutional Court ruled last month that Mr Zuma was compelled to appear before the commission.

Following his non-appearance on Monday, Justice Zondo said everyone was equal before the law and if Mr Zuma was allowed to defy the courts it would have far-reaching implications for democracy.

Mr Zuma has not commented since the judge’s ruling but has previously said he is not afraid to go to jail.

But some of his supporters, dressed in military fatigue, have marched outside his rural home, vowing to protect him.

Mr Zuma was forced to step down as president in 2018 after being dogged by allegations of corruption throughout his nine years in office.

His successor, Cyril Ramaphosa, took office on a pledge to tackle the issue.